Founded by Japanese immigrant flower growers at the turn of the century, the story of the California Flower Market, Inc. spans nearly the entire history of Japanese in America.  Through depressions, earthquakes, racial hostility, restrictive legislation and internment during World War II, the members of the California Flower Market have overcome adversity to serve the growers who built a thriving industry from the ground up.

One of the oldest and most successful Japanese-American-owned corporations in the United States, the California Flower Market has been the center of the wholesale flower industry in the San Francisco Bay Area for nearly a century.  It is one of the few wholesale markets in the United States owned and run for and by flower growers.

This book tells the history of the California Flower Market from its very beginnings, when growers hawked their flowers openly on the streets, to the present, from 640 Brannan Street in downtown San Francisco, where it serves as the heartbeat of the local flower industry.  This is also the story of the Japanese growers who began with a few greenhouses which they built themselves and who eventually came to dominate the flower industry in the Bay Area.

With many interviews, historical photographs, and colorful flower photos, Living with Flowers:  The History of the California Flower Market provides a glimpse into the world of the Japanese-American flower grower, past, present and future.  Living with Flowers is available for purchase for $39.95 for more information please contact: cfm@sfflowermart.com. 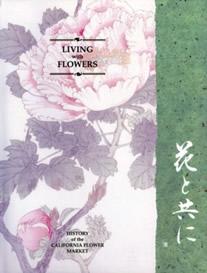 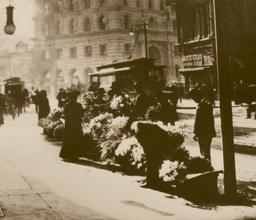 With beginnings paralleling the growth and development of the San Francisco Bay Area, the origins of the San Francisco Flower Mart go back to the late 1800’s when land was plentiful. Local flower growers could bring their product to Lotta’s fountain in downtown San Francisco three days a week, selling their product to local flower shops. A need for a centrally located market bringing together the three ethnically diverse groups of flower growers was fulfilled with the opening of a market located at 5th and Howard Streets in 1924. As flower growers expanded production areas outside of the Bay Area and as product from other parts of United States came in, the need for a larger more modern permanent facility led to the design and construction of our current market at Sixth and Brannan Streets in the South of Market area of San Francisco.

The grand opening of the San Francisco Flower Terminal in September 1956 marked the establishment of an industry icon. Today, officially known as the San Francisco Flower Mart, we now have over 60 vendors, purveyors of cut flowers, potted plants, blooming plants and floral supplies. We have evolved from being a “growers” market to being a marketplace for floral wholesalers. Product, which at one time was only from the immediate Bay Area, now comes from the far reaches of the world.Type your paragraph here.

Living with Flowers:
The History of the California Flower Market